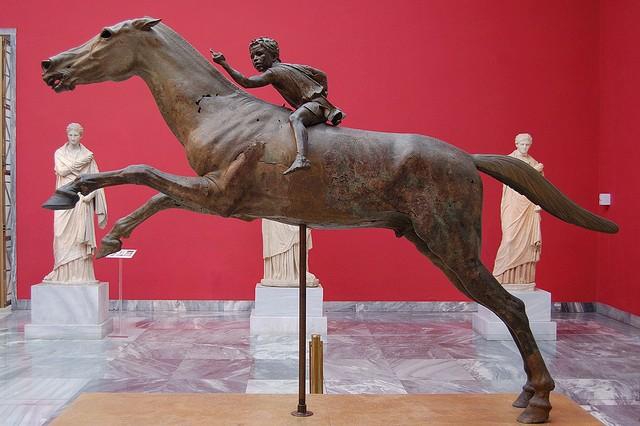 Housed in a neoclassical building built in the 19th century, that is one of the largest and most significant museums of ancient Greek art, the National Archaeological Museum of Athens holds 8,500 square metres of exhibition space. The museum presents the evolution of ancient Greek art and history from the prehistoric period (6800 BC) to the Late Roman Era (4th Century AD). The museum houses seven permanent collections:

The prehistoric Collection shows artefacts from civilisation between the 7th millennium to 1050 BC.

The Bronze Collection is one of the richest collections of bronze originals, including the 460 BC Zeus from Artemision.

The Vase and Minor Objects Collection includes some 2,500 vases and vessels showing the evolution of Greek potter.

The Vlastos Serpieris Collection consists of ancient Greek and Tarantine artefacts, distinguished for the ancient and byzantine treasures.

The Egyptian and Near Eastern Antiques Collection contains works dating from the pre-dynastic period (5000 BC) to the Roman Period (30 BC - 395 AD).

Cypriot Antiquities is an exhibition displaying 180 atrefacts which illustrate aspects of ancient life in Cyprus.

The National Archaeological Museum is closed on 25 - 26 December, 1 January, 25 March, Orthodox Easter Sunday and 1 May.

All of our providers offer 24/7 support