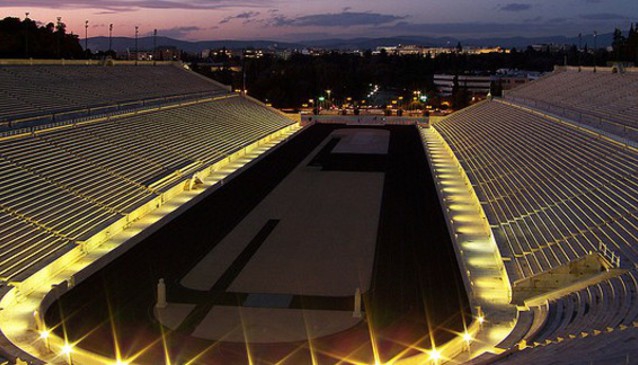 Kalimarmaro Stadium (meaning 'made of fine marble'), also known as the Panathinaiko or Panathenaic Stadium (meaning 'stadium of all the Athenians') is the athletic stadium that hosted the first modern Olympic Games in 1896. Reconstructed in 1895 from the remains of the ancient Greek stadium known as the Panathenaic, Kalimarmaro is the only major stadium in the world constructed entirely of white marble.

The original stadium built in 566 BC had wooden seating and was used to host the athletic portion of the Panathenaic Games, in honour of the Goddess Athena. The stadium was reconstructed in marble, by the archon Lycurgus in 329 BC and was extended and renovated by Herodes Atticus in 140 AD, to a seated capacity of 50,000 spectators.

The ancient stadium was excavated and restored with private funding by Evangelis Zappas for the revival of the Olympic Games. The stadium was refurbished a second time in 1895 for the 1896 Olympics with funding by the Greek benefactor Georgios Averof. During the 2004 Olympics, it presented the final circuit for the Olympic Marathon and also hosted the archery competition. On rare occasions, the stadium is also used as a venue for select musical performances with artists including Bob Dylan, Tina Turner, Metallica and Sakis Rouvas playing here.