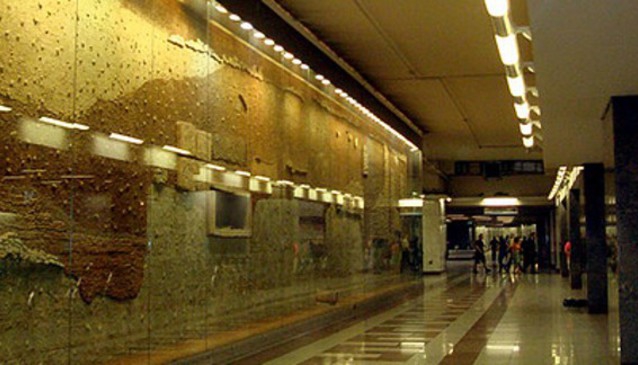 In the very heart of the city opposite the Parliament, Syntagma Metro Station is both a transport hub and museum.

Dating from the 1990s, when Athens was building its new metro for the 2004 Olympics, the station contains numerous artefacts dating from Classical times - including skeletons - excavated on the site as the station was being built.

A great many items are displayed in the station, the highlight being a glass-walled display behind which a number of these objects can be seen.

The Syntagma Metro Station is more than a metro station, it's a museum. Even if you don't need to use the metro, it is worth visiting. During construction of Athens metro, an exceptional number of archaeological findings where brought to light. Some of these findings can be seen at the station. The exhibits include ancient grave stones, pottery, an aqueduct from the 5th century BC, a 2,000-year old beehive and a mosaic from the 5th century AD. Most interesting is the geological cross-section on display, with each layer of earth representing a different historical period. An example of this would be the grave containing a skeleton from the 4th century BC, laying a few metres below a 16th-century cistern.