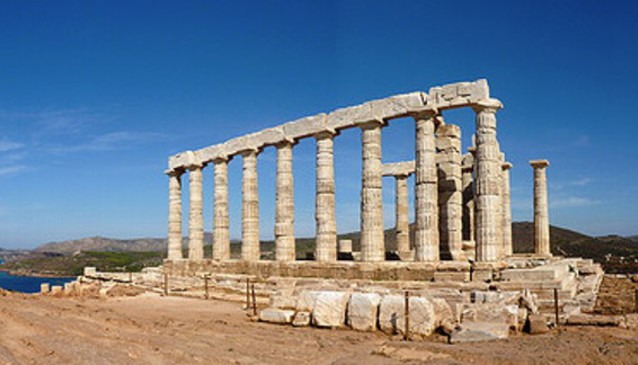 The route to Sounio is about a one-hour drive from central Athens and follows the scenic coastline of the Saronic Gulf, passing through the resorts of Varkiza, Ayia Marina, Lagonissi, Saronida and Anavissios. The journey makes for some beautiful views, so take some stops to admire the view and the sparkling blue Aegean sea.

Crowning the peninsula, at the southernmost Cape Sounio, is the sanctuary of Sounion - the famous Temple of Poseidon; the most important and most stunning sanctuary of Attica, built during the Golden Age of Perikles to worship the god of the sea, Poseidon. The great marble shrine was built in the 5th century BC. The ruins bare the deeply engraved name of English Romantic poet Lord Byron (1788-1824). The site is a popular day-excursion for tourists from Athens, with the sun setting over the Aegean Sea, as viewed from the ruins, a sought-after spectacle.

According to legend, it is from this cliff that the King of Athens, Aegeus, leapt to his own death, believing his son Thisseas had lost the battle with the dreaded Minautavros, a monster that was half-human and half-bull, in Crete. Since then, the amazing blue waters have been called the Aegean Sea.