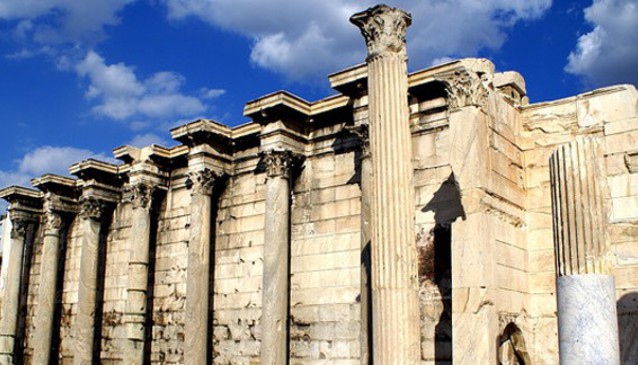 Hadrian's Library was built in 132AD by emperor Hadrian and sits on the north side of the Acropolis, immediately north of the Roman Agora. During its heyday, most of the space was a flashy marble courtyard, complete with gardens and a pool. The rectangular building of the library is comprised of a Corinthian propylon on the west side; an open peristyle courtyard on each of the long sides; the main library on the east side; and a number studies, lecture halls and music rooms throughout.

Sadly, this luxurious Corithian-columned building was destroyed by the Heruli in AD 267, and was subsequently incorporated into the Late Roman fortification wall. It was repaired by Herculius in 412 AD, and in the 5th century the quatrefoil building of the Early Christian church was constructed in the centre of the peristyle court. After its destruction, a three-aisled basilica was erected on its ruins in the 7th century, which was in turn superseded by the single-aisled church of Megale Panagia in the 11th century.