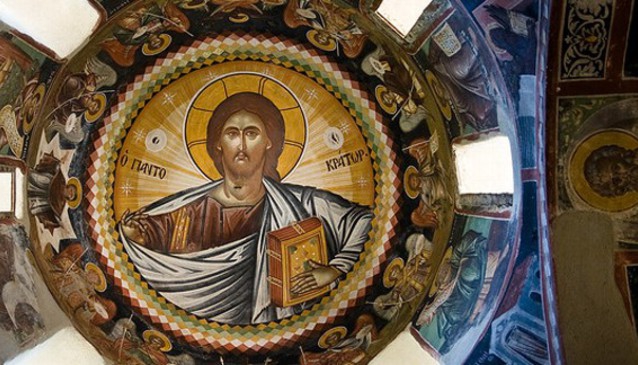 The Kesariani Monastery is situated to the east of Athens, a short distance by car for visitors. It is an idyllic location, perched in the foothills of Mount Hymettos. Indeed it is so heavenly that according to Greek mythology, the place was a favourite of the god Hephaistos.

The Kesariani Monastery is surrounded by a very high wall and has only two entrances. This was an integral part of the architectural design when it was built in the late 11th century as a presentation to the Virgin of the Temple. It was built upon the ruins of a former classical-style basilica that the Greek rulers no longer believed was of value to their religious beliefs.

The building is a four-column church, with a domed roof, and its walls are decorated with ornate brick ornaments. The barrel-vaulted chapel to the north, dedicated to Agios Antonios, was added later on in development, during the 16th century. Whilst the Narthex was added in the 17th century. The bell-tower was the final major addition, only added in the 1800s, almost 800 years after the initial building had been finished.

The interior of the church is decorated with wall paintings dated before 1700 while those in the narthex are a little earlier, dated to 1682 and made by Ioannes Hypatios, according to an inscription. A local tip about the monastery is that it also used to hold a vast library of resources which were all relocated to the city of Athens, only to be destroyed by a peasant uprising in 1821.

In the Western courtyard by the high exterior wall there is a spring of mountain water. This source is believed to have miracle properties, in the same way that the Virgin Mary was said to have appeared in Lourdes, France. It is believed this particular well cures infertility in women.

At the monastery there is an extensive educational programme designed especially for children, that aims to grow their understanding of the monument in language suitable to their age range.

The first Sunday of every month, except for July, August and September (when the first Sunday is holiday, then the second is the free admission day.)

Soldiers carrying out their military service

University students from Greece and the EU