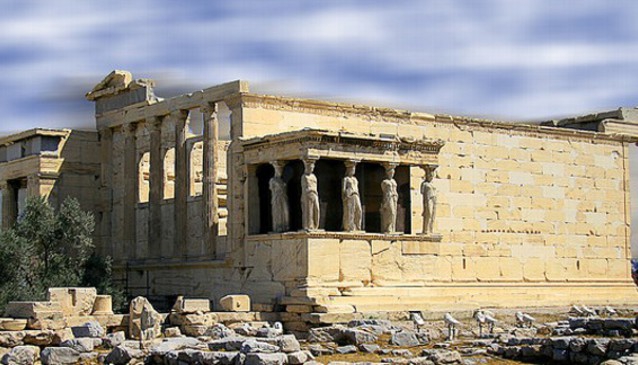 Directions to The Erechtheion, Acropolis

The Erechtheion, the graceful building on the north side of the sacred rock of the Acropolis, was erected in 421-406 BC as a replacement of an earlier temple dedicated to Athena Polias, the 'Old temple'. The name 'Erechtheion' derives from Erechtheus, the mythical king of Athens, who was worshipped there.

The building owes its unusual shape to the irregularity of the terrain; there is a three-metre difference in height between the eastern and western parts, and the multiple cults it was designed to accommodate. The eastern part of the building was dedicated to Athena Polias, while the western part served the cult of Poseidon-Erechtheus.

The temple was burned in the first century BC and was subsequently repaired with minor alterations. In the Early Christian period it was converted into a church dedicated to the Theometor (Mother of God). It then became a palace under the Frankish rule and the residence of the Turkish commander's harem in the Ottoman period. During the Greek War of Independence the building was bombarded and severely damaged.

Restoration was undertaken immediately after the end of the war and again between 1979-1987, when the Erechtheion became the first monument of the Acropolis to be restored as part of the recent conservation and restoration project.

The Erechtheum is known mainly through its porch, its columns instead of pillars had six girls (korai) known as the Caryatids (named after the city of Karya in the Peloponnese), but it is not known exactly who they represent. One of the six Caryatids was brought in 1811 by Lord Elgin to Britain (now in the British Museum), the remaining five were replaced by replicas to prevent further damage from the smog (the originals are in the Acropolis Museum).

Included in the price of the ticket of the Acropolis.