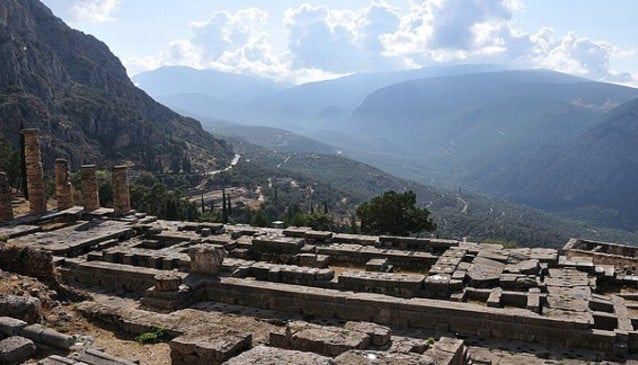 The Sanctuary of Delphi - Athens

Directions to The Sanctuary of Delphi

At the foot of Mount Parnassos, within the angle formed by the twin rocks of the Phaedriades, lies the Pan-Hellenic sanctuary of Delphi. Set within a most spectacular landscape, it was once regarded as the centre of the world and is arguably the most classical site in Greece.

The routes of Delphi trace back to prehistory and the myths of the ancient Greeks. According to mythology, Zeus released two eagles from opposite ends of the earth to fly across to meet at its centre, or the 'navel', and the eagles met at Delphi. Personally blessed by Apollo himself, Delphi was the holiest site in the world for the ancient Greeks.

In the sixth century BC, under the League's protection and administration, the sanctuary was made autonomous. It increased its territory as well as its political and religious influence throughout Greece, and re-organised the Pythian Games - the second most important games in Greece after the Olympics - which were held every four years.

During your visit, be sure not to miss the fantastic Delphi museum, which houses the greatest offerings brought to the Oracle from around the world; the theatre built in the 4th century BC; and the nearby Sanctuary of Athena Protaia, built in honour of the goddess of war.