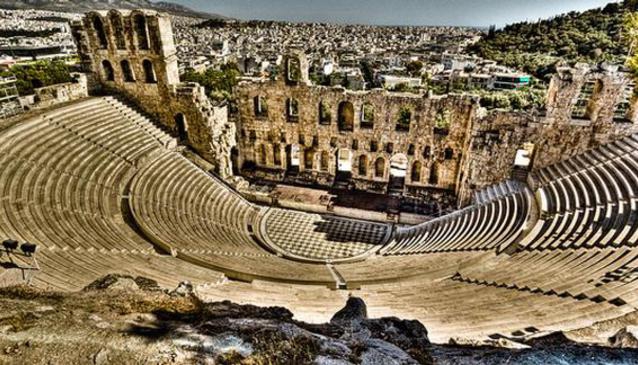 Directions to The Roman Odeon of Herodes Atticus

The famous Herodes Atticus Odeon dominates the western end on the south slope of the Acropolis. The exact date of construction is unknown, but it was the third Odeon constructed in ancient Athens after the Pericles Odeon on the south slope and the Agrippa's Odeon in the ancient Agora.

The Odeon of Herodes was originally a steep-sloped amphitheatre with a three-story stone front wall and a wooden roof, and was used as a venue for music festivals with a capacity of 5,000. It was destroyed in 267 BC at the incursion of the Heruli, who burnt and flattened many buildings in ancient Athens, but in later years it was incorporated within the fortifications of the city of Athens. Since 1957 it has been one of the main venues of the Athens Festival, which takes place annually from May to October, staging art festivals including musical concerts, ancient drama performances and opera. In more recent years the Odeon has hosted a variety of significant Greek and International performers including Sting, Elton John and Andrea Bocelli.