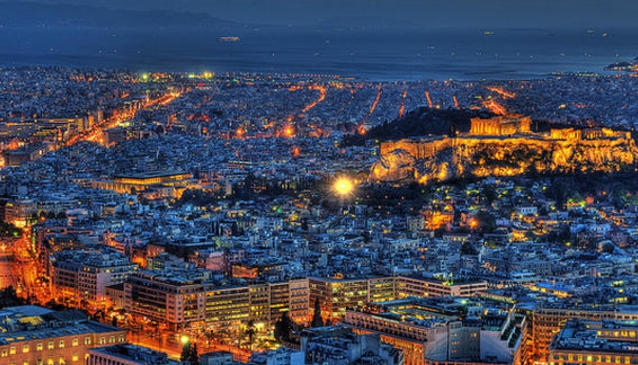 A wood in the centre of Athens! At a height of 277 metres (approximately 1,000) feet, Lycavittos Hill is the highest point in the city, and perhaps the best spot in which to get an aerial view of Athens.

According to mythology,the goddess Athena wished for her temple in Acropolis to be closer to the heavens. So, on a stormy night she visited Mount Penteli and took a large rock with the intention on placing it on top of the existing. As she transported the rock, two large birds approached her, bringing her bad news. In her rage and haste, the rock fell in the centre of Athens instead. In the ancient times Lykavittos hill was covered in lush vegetation and on its top stood a temple dedicated to Zeus. By the time Athens was liberated from the Turkish occupation, the hill was left bare with no trees at all. Reforestation started in 1880 and was completed in 1915 creating a paradise in the centre of the capital, and a favourite place for incurable romantics and nature lovers.

Visible from Lykavittos Hill is the Acropolis, the port of Pireaus, and the island of Aigina. On the top of Lykavittos hill there is the picturesque, whitewashed church of Ayios Georgios. The church bell was donated by Queen Olga. On the eastern side is an outdoor theatre, which in the summer season hosts wonderful concerts with top musicians from around the world, as well as a number of artistic events.

If you are feeling energetic you can hike to the top, or if you prefer a more relaxing stroll you can take the cable car to the top and either walk or get the cable car back down. If you decide to walk down the forest path you will encounter Dexameni Square in Kolonaki, where you can grab a bite to eat. The entrance is on the corner of Aristippou and Ploutarchou streets.