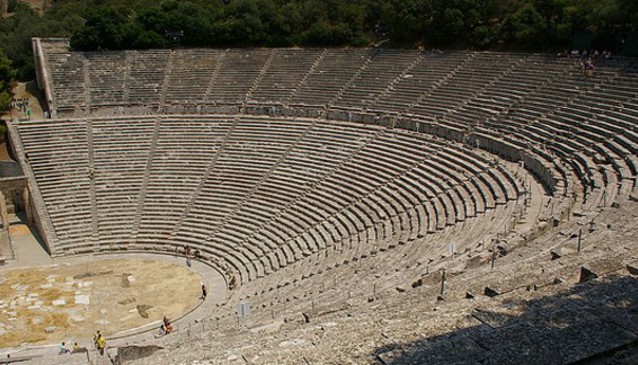 The Ancient Theatre of Epidaurus - Athens

Directions to The Ancient Theatre of Epidaurus

Epidaurus Theatre was built during the 4th century BC and was designed by Polykleitos the Younger. Having been brilliantly preserved, it was discovered in 1970 and excavation began in 1972. It is thought to be one of the best attractions in Greece, with its exceptional symmetry and beauty, and its astonishing acoustics.

The original 34 rows were extended by another 21 rows by the Romans and has since seated up to 15,000 people, all of whom have perfect and precise sound regardless of their position. As is typical of Greek theatres (as opposed to Roman ones), there is a magnificent view of a lush landscape behind the 'skênê' (the background building which connected the platform stage, in which costumes were stored), which is an integral part of the theatre itself.

The theatre is still in use today and holds frequent classical plays, concerts and festivals. The Epidaurus Festival takes place every year in late spring. Admission fees are between €15 - €50 and performances usually start at 9pm.

6 March, in memory of Melina Mercouri

Sundays in the period between 1 November and 31 March