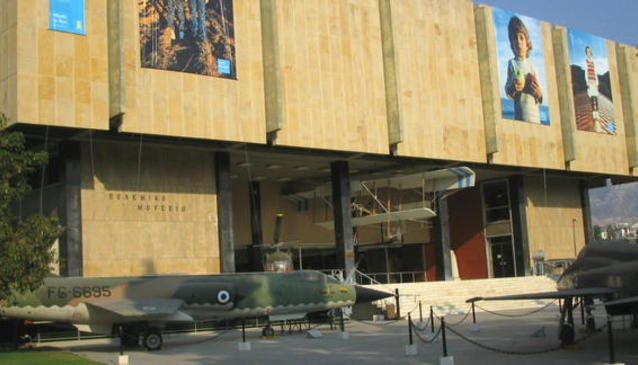 The War Museum was created to honour all the veterans who have fought for Greece. It opened in 1964 and covers the history of war. The permanent collection includes the P.Z. Saroglos Weaponry Collection, which showcases rare and valuable hand-to-hand weapons, as well as artifacts from other civilisations such as Ancient China and Ancient Japan. There are also a number of temporary exhibitions housed across the four levels of the museum.

The design of the museum was undertaken by a team of distinguished scientists, headed by Professor Thoukidides Valentis of the National Technical university of Athens (N.T.U.A).
On July 18, 1975, the President of the Hellenic Republic H.E. Constantine Tsatsos and the Minister of National Defense Evangelos Averof-Tositsas inaugurated the Museum.
Its various activities include the publication of books, the establishment and maintenance of monuments and memorials and the aid to services and agencies all over Greece.
The Museum's exhibition areas are distributed over four levels (floors) and present images of Greek history from antiquity to the present.

Closed: on Mondays, New Year Day, on Good Friday, on Good Saturday, on Easter Sunday, May Day and on Christmas day.