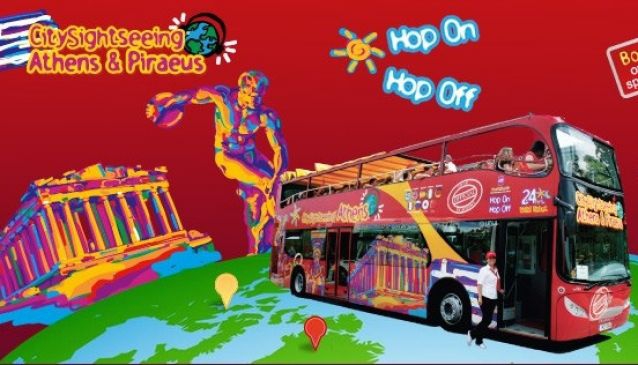 City Sightseeing combined Red & Blue line tours of Athens and Piraeus operate daily with a 30-40 minute schedule. The Tour of Athens (Red Route) departs every 30 minutes from our terminal stop in Syntagma Square starting at 09.00 until 21.00 during the months of April - October & from 09.00 until 18.30 from November - March.

The Piraeus Tour (Blue Route) departs every 30 minutes from our Terminal in Akti Miaouli (near the Cruise Ship Terminal) from 08.30 until 20.00 during the months of April - October. There are 27  stops for both lines that one can Hop On & Hop Off from as many times as one wishes - the ticket is your passport to unrivalled freedom - everyone can get off at any of the many stops to have a look round and then rejoin a later bus.

The Athens Tour (Red Route) takes approximately 90 minutes and traces the history and culture of Athens.

For both lines commentary is available in 11 languages explaining the history from ancient times until today.

And with a bird's eye view one will see more of the quirks and interesting little corners of both Piraeus and Athens. What's more it gives you the opportunity to save energy for the museums, art  galleries, heritage spots and last but not least, the fantastic shopping!